This page provides an update on the Pan Malaysia Full Tensor Gravity Gradiometry (FTG) programme currently being carried out by Bell Geospace in conjunction with Petronas. The timing of this piece is pertinent to the Malaysia Bid Round 2021 (MBR2021). Nine of the MBR2021 blocks have FTG data coverage; three in the Malay Basin, four across West Luconia, Tatau and West Balingian and two along the transition zone along the Inboards Basin in Sabah. Partial coverage is available over three blocks in the Malay Basin and two off Sabah.

The map in Figure 1 shows the cumulative processed FTG Gravity data combined with satellite gravity to give us the Free Air anomaly for all areas completed to date on the programme. The data is mostly acquired over shallow water areas and the anomalous responses are from the underlying geology.

The Pan Malaysia FTG and magnetic programme was launched in 2016 on the strength of early FTG survey results. In what is the largest single holding of FTG data anywhere in the world amounting to 376,000 square kilometres, across three primary areas from the Malay and Penyu Basins off Peninsular Malaysia to Sarawak and Sabah to the east.  The objective of the programme is to acquire clear and informative non-seismic data sets to help identify new opportunities in the form of new plays and prospects from current data holdings across the key basins both onshore and offshore Malaysia. The programme comprises many individual surveys acquired from 2012 to present day. The survey design is set with a 2km traverse line spacing and 8km tie line spacings. Both FTG and magnetic data are included.

FTG and magnetic data work together for imaging structures, locating their geological setting and determining depth to basement. This technology provides an ability to generate images showing clear structural patterns where seismic imagery is challenging such as imaging beneath porous carbonates in Central Luconia or dealing with transition zones from land to sea across the region. Furthermore, FTG and magnetic data greatly assist with planning for additional seismic acquisition.

Example Application of Data in the Peninsular Malaysia

The data coverage for offshore Peninsular Malaysia extends from Malay Basin in the north across the Tenggol Arch and Penyu Basin before terminating on the Johor Platform.

The Tertiary aged Malay and Penyu Basin share a similar composition with 14km of sediment in Malay but less than 5km in Penyu. Key target structures are inversion related and play host to significant fields in the Malay Basin. In addition, previous drilling has revealed play potential at a shallowing but fractured Top Basement and these represent some of the new plays in the offered MBR2021 Bid Blocks.

Workflows using the data from the FTG and magnetics data acquisition programme detects this fractured basement play potential which might be producers for oil and gas.

The Malay Basin gravity signal shows two sets of primary trends, a North North West series of ridges that appears cross-cut by a network of East North East to East West trending lineaments resulting in a set of localised structures and basins.

The Magnetic data supports the North North West trend indicating this is the underlying regional basement trend. The gravity anomalies within the Malay Basin are not supported by a magnetic signature thus the FTG’s sensitivity to the geological complexity within the basin becomes particularly relevant. A depth to basement map generated from the Magnetic and FTG data points to a deep floor beneath Malay rising beneath Penyu and reaching near seabed along basin flanks. An example of this is available on request from Bell Geospace.

Example Application of Data in Sarawak

Embracing the FTG data as part of the technical analysis for Sarawak enables exploration teams to directly link density and structure mapping from the FTG with the seismic to build a comprehensive sub-surface exploration model for the area.

Interested parties can request a sample from Bell Geospace which shows the gravity signature pattern from the FTG for the two blocks on offer in the transition zone, SK328 and SK427, over the Tatau and West Balingian area. A Structural Lineament map, which is identified from an analysis of the horizontal tensor component data directly measured with the FTG shows a white linear anomaly pattern pointing to structures with contact zones that yield a positive density contrast and are easily correlated with known geological structure. Others evident in the map reveal additional complexity in the subsurface.

Basement faults and fractures move upwards into the shallower sections, a process that creates high porosity zones making fantastic reservoirs and production sweet spots. FTG is an ideal technology for mapping their distribution block wide. Lineament Density and Intersection Density Maps do a good job of imaging these because the faults and fractures create subtle contrasts at different levels and this is what can be identified with magnetic and gravity data analysis. 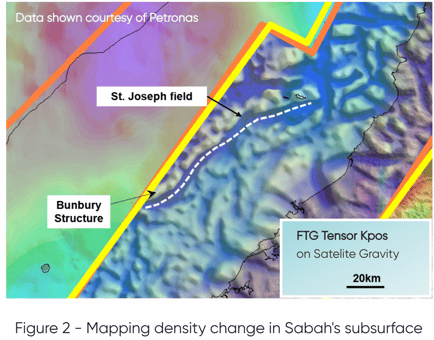 The Kpos map is an additional output from the Tensor analysis and is ideal for mapping structural shapes defined by complex topography atop an underlying horizon. Correlation with the Kpos map allows characterisation of a signature pattern associated with localised structural complexity at depth. Kneg maps in the region are particularly useful. Bell Geospace can provide sample Kneg maps in SK440 and SK439 which show the orientations of the lineations in SK440 and SK439 which have clear implications for migrations of hydrocarbons.

Acquisition and Utilisation of Data in Sabah

The data acquisition programme in Sabah is 50% complete, clear geology is revealed. The completed portion is along the transition zone all along the coastline in Sabah and offers clear insight to identification of target zones where additional seismic acquisition will be costly. Again, a series of example Kpos maps from this region can be shown to interested operators. The maps show clear sensitivity to the structural complexity at depth along the transition zone. As Bell Geospace complete the acquisition in Sabah, they will be working the data to reveal continuity and extent of structural patterns across the remaining part of the Inboard Basins.

Getting started with the data

The data is available in 9 parcels which are grouped together in geological 3 bundles. Companies can purchase parcels or bundles.

The data is available in tiers depending on the level of interpretation and consultation required.

Please use the public comments box below or write to Bell Geospace.