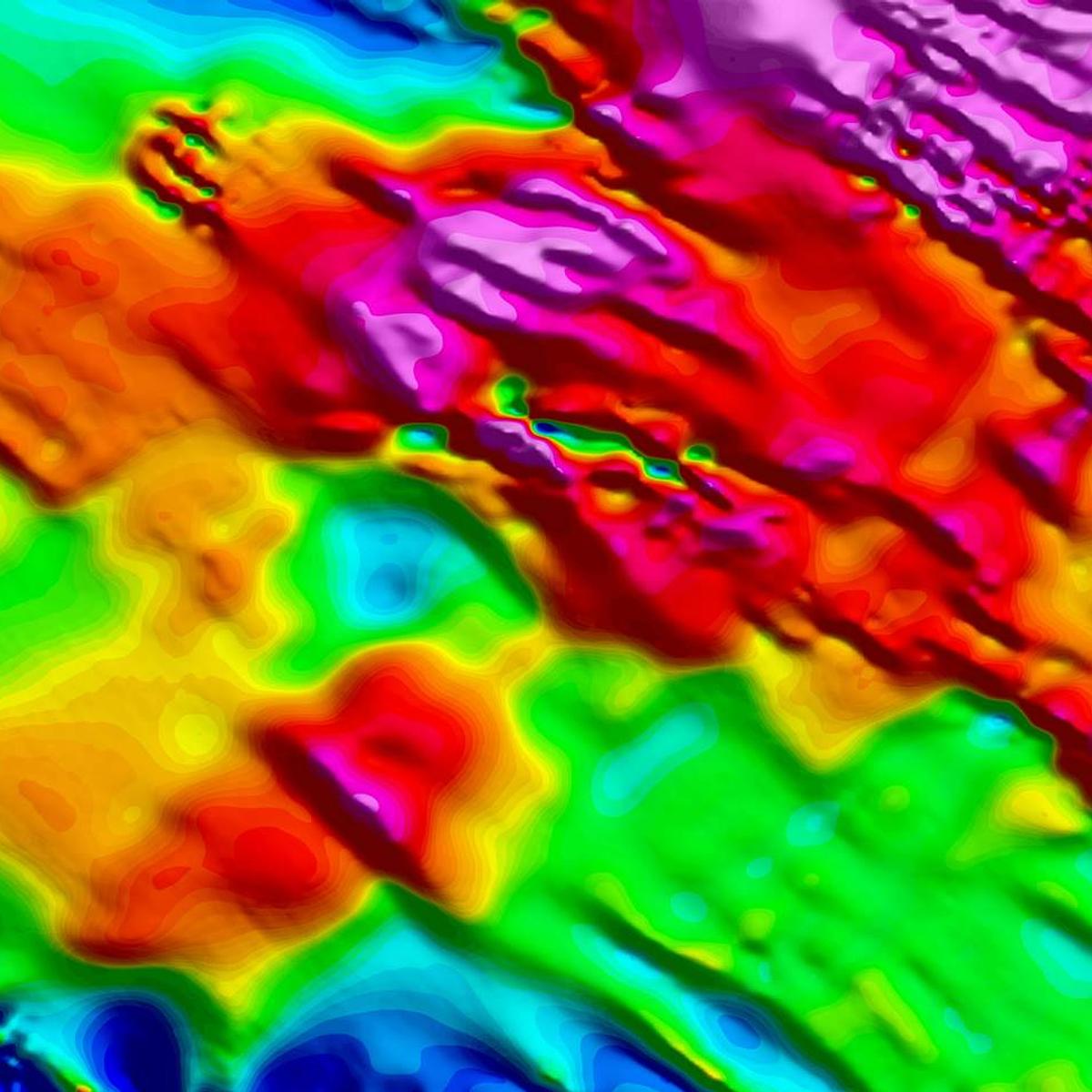 Magnetics is a measure of the variation in the intensity of the Earth’s magnetic field caused by sub-surface geology.

Survey practice passes a magnetic field measuring device over the surface and induces a localized field. Underlying geology responds when it comprises mineralogy susceptible to being magnetized.

Examples include magnetite bearing rocks and are typically abundant in igneous and metamorphic rocks. Secondary sources are found as reworked magnetized rocks deposited in the form of sedimentary layers within basins.

Magnetic surveys are performed using instruments deployed on ground, marine and airborne platforms. Diligence is executed to ensure any recorded signal is directly sourced by subsurface geology. Such practices involve compensation for platform contribution to the recorded signal as well as post acquisition processing to remove the effect of the background Earth’s field.

The Earth’s magnetic field varies in strength across the globe, being strongest at the poles and weakest in equatorial regions.

Igneous and metamorphic rocks containing magnetite reinforce the field producing positive anomalies, whereas sediments produce minimal responses. However, when the poles are reversed, the opposite occurs and magnetic mineral bearing geology will induce a negative anomalous response with respect to the field. Such responses are often preserved as permanent magnetization (remanence) in rocks formed in the geologic past.

Magnetic anomalies show different responses at different locations on the earth (magnetic latitude) because of magnetic inclination. This is the angle at which the field is oriented with the surface and changes with latitude.

The image below shows profiles of magnetic responses for a source of the same size at different latitudes in the northern hemisphere. The effect is reversed in the southern hemisphere due to negative inclination. The anomalous response is symmetric at the poles, becoming more asymmetric away from the poles until it flattens or reverses at equatorial regions.

These varied magnetic responses, described as the total magnetic intensity (TMI), are often challenging when interpreting signal as geological source bodies. Consequently, the magnetic signature patterns are transformed to reflect a survey acquired at polar regions.

The transformation is performed by means of a reduction to pole and described as the RTP field. As a result, asymmetric anomalies become symmetric and negative responses for magnetic geology at equatorial regions become positive.

Magnetization is best expressed in igneous and metamorphic rocks associated with crystalline basement and intrusive/volcanic activity. Sediments contain negligible magnetite and produce minimalistic responses. Magnetization dissipates completely at temperatures exceeding the Curie point making magnetics ideal for resolving geology at depths from near surface to about 25 to 40km.

Magnetic surveys are acquired on airborne platforms for oil and gas, and mineral exploration. This is primarily to map and determine the depth to basement and delineate structural frameworks, but also to locate igneous and volcanic geology that play host to mineral resources.

Magnetic data are also acquired as part of multi-disciplined surveys onboard aircraft where FTG, gravity and EM data are acquired.

The unique benefit of multi-disciplined survey work is cost-efficiency due to the simultaneous acquisition of desired geophysical data type to expedite exploration workflows.

Magnetic data are routinely acquired on FTG surveys and the data is used to screen FTG anomaly patterns to quickly discern basement or igneous and volcanic source from basin fault block responses.

Magnetic data quality acquired as part of a simultaneous magnetic and FTG survey facilitates direct detection and mapping of basement, structural frameworks and the presence of igneous or volcanic complexity in the subsurface.

Figure 1 is a mineral exploration survey from Africa where FTG and magnetic data were acquired ahead of a drilling programme.

The magnetic shows clear definition of dyke like intrusions along edges of the northeast oriented positive gravity anomaly. A similar pattern is evident in the central part of the survey, but the magnetic mineral content is likely less than that forming the linear anomalies to the west.

Figure 2 is an oil and gas exploration survey offshore of Northwest Europe, in an area where key basin targets are overlain by extrusive volcanics.

The magnetic data below acquired concurrently with the FTG identifies reversely magnetised volcanics (negative anomalies) amongst a backdrop of north-northwest oriented dyke swarms.

A free feasibility test to explore your options

Find out if a Bell Geo survey is right for your project. Predict the usefulness of FTG / Mag data. Receive inferred results, pricing and time frames.